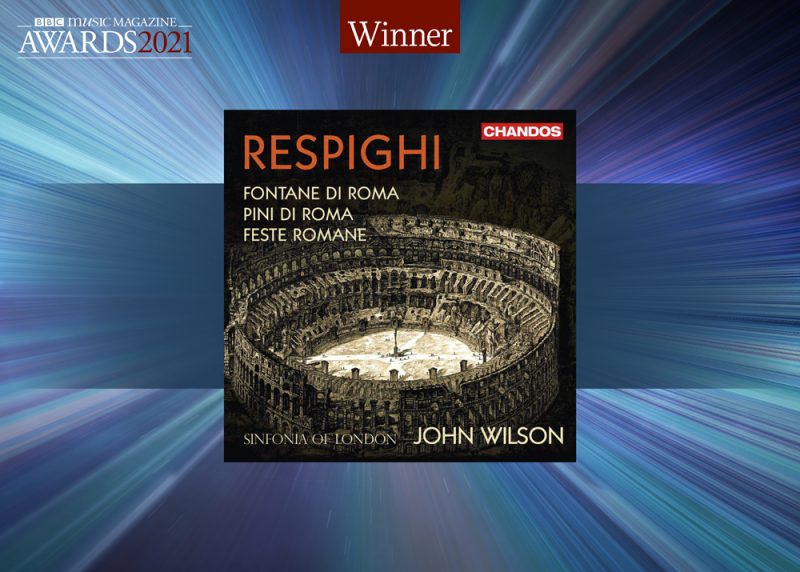 Respighi – Roman Trilogy has won the orchestral category in the BBC Music Magazine Awards 2021, announced online on 14 April. Released in August 2020, the album reached Number 1 in the UK Specialist Classical charts and was universally acclaimed in the press. See the full list of winners here.

On receiving the award, John Wilson, conductor and Artistic Director of Sinfonia of London, said, “I’m absolutely thrilled to win this award, as are all my friends in Sinfonia of London. We worked incredibly hard to do justice to Respighi’s marvelous Roman Trilogy and we were so wonderfully well served by our producer Brian Pidgeon and the great engineering of Ralph Couzens who captured all of the detail that was happening in the room.”

With its dynamic score calling for a vast array of instruments, including every imaginable piece of percussion plus four-handed piano, organ, mandolin and even a recorded nightingale, Respighi’s outstandingly evocative Roman Trilogy – Fountains of Rome, Pines of Rome and Roman Festivals – is one of the most lavish and exuberant works in the repertoire, all captured on this disc in gleaming Chandos sound.

‘Respighi’s best-known work – Roman Trilogy – is brought to dazzling new life by John Wilson and his historic recording orchestra. Deprived as we are of big orchestras, this disc is a joy: massive, audacious, and vividly played.’